My blog tour continues today! I’m talking about my deep-seated ambivalence about Georgette Heyer, Jane Austen, and trying to be taken seriously over at the Book Smugglers. (Note: I DO mean “ambivalence.” I love Georgette Heyer and Jane Austen a LOT.) There are also hilarious pictures of My Family’s Poor Fashion Choices Through Time. Go over and read it! (And check out the Smugglers’ awesome blog!) I’m giving away a signed book in the comments.

Smuggler Ana also posted my very first review! And she was very kind to me. Is it tacky to link to reviews? It just seems weird not to when I’m linking to my guest post.

In other news, my friend Alice just linked me to this article about a new Alexandre Dumas biopic. They’ve cast Gerard Depardieu to play Dumas and are darkening his skin and putting him in a curly wig for the role. Because if you didn’t know, Alexandre Dumas was part black. Here’s a picture of him: 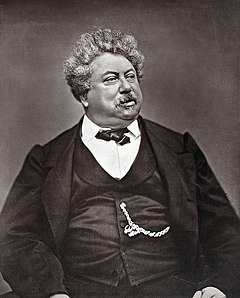 And here is a racist caricature from his own lifetime, entitled “The Quadroon Chef: Dumas concocting his bouillabaisse of romance”:

I still remember how shocked and angry I was the first time I saw this image, when my mom and I went on a tour of the Château de Monte-Cristo, Dumas’s amazing estate near Paris. I remember how sad I was when I read his novel Georges about a mixed-race hero who tries to start a slave revolt and fails, and I saw all the racism he’d written into it, the internalized beliefs about black inferiority, and how awful that must have been for him to live with every day. (The book does have a lot of great stuff in it, by the way. It just also has a lot of messed-up stuff in it.)

Just. I am a HUGE Dumas fan. HUGE. The Three Musketeers in particular was one of the defining books of my youth and it still means a lot to me. The man was a brilliant writer and a really nice guy and I love him. And apart from anything else, apart from what it says about the racism and marginalizing in European and American film industries, apart from how that affects all of us and perpetuates racism in our cultures, apart from how angry I would be if I were a French mixed-race actor who could have tried for this role if it hadn’t already been handed to a white guy, apart from ALL OF THAT, this is a huge insult to HIM. Didn’t Dumas face enough racism when he was alive? Haven’t we come far enough that we can show him some respect? Is it so hard to cast a mixed-race actor in your movie? Is it really?